The provider has more than 25 hours booked within 7 days

As they have not averaged more than 25 hours/week over the last month, more appointments may be scheduled, however, if this practitioner averages more 25 hours/week in a month, the practitioner’s user account should be changed to full-time

This alert indicates that the provider has exceeded the 25-hour limit within the seven days prior to the booked appointment, and gives the practice an 'advance warning'. The practice may need to make sure when booking appointments for the next couple of weeks for this provider that the limit is not exceeded again.

You will still be able to book appointments for this provider. However, users will continue to receive this alert until the total for the previous seven days falls below 25 hours, or the provider upgrades to a full-time licence.

Note: This check is no longer performed if you have upgraded to Indigo Service Pack 2.

This alert indicates that the provider has a recent history of averaging more than 25 hours of appointments a week, and the practice should consider obtaining a full-time licence for this provider.

You will still be able to book appointments for this provider. However, users will continue to receive this alert until the average weekly hours for the previous month falls below 25 for the provider, or the provider upgrades to a full-time licence.

Note: If you have upgraded to Indigo Service Pack 2, Bp Premier will consider the Sunday immediately following the booked appointment to be the end of the current weekly period. 28 days will be counted back from this Sunday to calculate the average weekly hours.

In the third week, when a user books the appointment that exceeds the 25-hour total, the first alert will appear, informing the practice of the one-off instance where the 25-hour limit has been exceeded. This alert will reappear for all appointments booked in that week that add to the running 7-day total over 25 hours.

In the fourth week, as soon as an appointment is booked in which the weekly average for the past 28 days exceeds 25 hours, the second alert will appear, even though Jane is only booked for 24 hours that week. The alert will reappear for each appointment until the running 28-day weekly average falls below 25 hours.

How are the total and historical average values calculated?

A provider might have only a few hours booked in a week, but an appointment would still trigger the weekly average alert if the provider had a large number of hours booked earlier in the month, for example.

Has the licence key changed for SP1?

When you update your subscription with Bp Premier, Best Practice Software Sales will issue you two licence keys, a long key and a short key. The key you enter into Bp Premier Practice Details will depend on which version of the software you are running.

Even though the licence keys are different for Bp Premier versions Indigo SP1 and later, the process of entering a licence key is the same. 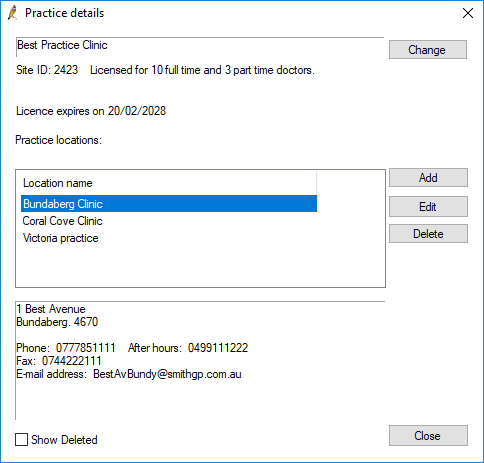 Note: The version of Bp Premier for this online help knowledge base has been ‘sunset’: official support for this version has ceased, including the provision of version-specific templates, old reports, minimum software requirements, and maintenance of the online help. Best Practice Software recommend upgrading to the latest version of Bp Premier, available from the Resource page of our website. Support is always available to assist our users in upgrading to the latest version.